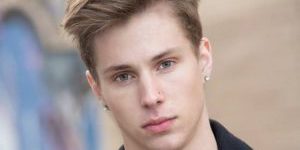 He began his career when he lived in Phoenix, Arizona learning from some of the pioneers of the hip hop culture, including his first crew and family, Furious Styles Crew. From there he moved his training to Seattle, Washington where he became a member of Breaking Point Dance Company in Edmonds, WA who, in 2009, placed third in the Hip Hop International USA Hip Hop Championships. That same year, they went on to place eleventh in the World Hip Hop Championships. When he moved to Utah at the age of twelve, he was invited as a guest artist in Odyssey Dance Theatre’s fall show, “Thriller” for two years in a row. He also performed in Odyssey Dance Theatre’s production of “It’s a Wonderful Life,” playing a Young George Bailey. He trained at many different dance studios including Center Stage Performing Arts in Orem, Utah. Through them, he participated in different national competitions, auditions, music videos, and movies, including a internet web series with Flavor Flav and the movie “Jonah and the Great Fish,” with David Osmond. When he turned 17, he began his independent dancing career, teaching at dance studios including Millennium Dance Complex Salt Lake City. He has also worked with the Utah Jazz Dancers, and video artists including Scott Winn. At the age of 18, Tristan began to teach at many different workshops across Utah including Lovolution of Hip Hop. He also began to set choreography for many different companies including high schools, and dance studios all over Utah and even Idaho. At 19 he became the hip hop director at American Expression of Dance in Draper, Utah, having received Studio Showcase and Best of Show awards at competitions including 24/7 Dance Convention and Utah Dance Fest. He has also recently had his choreography showcased in the Millennium Experience in Los Angeles, CA with members of Millennium Dance Complex Salt Lake City. Tristan also has recently choreographed for the Bboy Federation’s production of “They Reminisce.” He is also assisting in choreography and will be dancing in Urban Fairytalez’s production of “Who Are You? A Nonsensical Trip Through Wonderland.” Tristan currently works full time as a teacher and choreographer. Through all of these opportunities, he has found his home with his crew Utah Urban Dance Organization (U.D.O.) where he resides as a dancer and artistic director. U.D.O. is a nonprofit organization that works to strengthen themselves, as well as other dancers and kids in their community through fundamentals of hip hop training and culture, including all elements of hip hop. Tristan Gray is known for his intricate style of choreography that applies fundamental hip hop moves and blends them with his quirky style and effortless swagger. He wishes to empower the minds of his students through his teachings of hip hop fundamentals and techniques, as well as his challenging training of applying those styles to everyday dancing and choreography.